St. Thomas was born a Jew and was called to be one of the twelve Apostles. His birth and death dates are unknown, but his feast day is celebrated July 3. He lived before the formal establishment of the Catholic Church but is recognized as the patron saint of architects.

He was a dedicated but impetuous follower of Christ. When Jesus said He was returning to Judea to visit His sick friend Lazarus, Thomas immediately exhorted the other Apostles to accompany Him on the trip which involved certain danger and possible death because of the mounting hostility of the authorities.

At the Last Supper, when Christ told His disciples that He was going to prepare a place for them to which they also might come because they knew both the place and the way, Thomas pleaded that they did not understand and received the beautiful assurance that Christ is the Way, the Truth, and the Life.

St. Thomas is best known for his role in verifying the Resurrection of his Master. Thomas' unwillingness to believe that the other Apostles had seen their risen Lord on the first Easter Sunday earned him the title of "doubting Thomas."

Eight days later, on Christ's second apparition, Thomas was gently rebuked for his skepticism and furnished with the evidence he had demanded - seeing in Christ's hands the point of the nails. Thomas even put his fingers in the nail holes and his hand into Christ's side. After verifying the wounds were true, St. Thomas became convinced of the reality of the Resurrection and exclaimed, "My Lord and My God," thus making a public Profession of Faith in the Divinity of Jesus.

St. Thomas is also mentioned as being present at another Resurrection appearance of Jesus - at Lake Tiberias, when a miraculous catch of fish occurred.

In art, Saint Thomas is commonly depicted as a young man holding a scroll, or as a young adult touching the resurrected Christ's wounds.

Saint Thomas was mentioned in several texts, including one document called The Passing of Mary, which claims then-apostle Thomas was the only one to witness the Assumption of Mary into heaven, while the other apostles were transported to Jerusalem to witness her death.

While the other apostles were with Mary, Thomas was left in India until after her first burial, when he was transported to her tomb and he saw her bodily assumption into heaven, when her girdle was left behind.

In versions of the story, the other apostles doubted Thomas' words until Mary's tomb was discovered to be empty with the exception of her girdle. Thomas and the girdle were often depicted in medieval and early Renaissance art.

According to an ancient story, you rendered most powerful assistance for constructing a church in a place where pagan priests opposed it.

Please bless architects, builds and carpenters that through them the Lord may be honored.

If you were given a saint’s name at Baptism, that saint is your patron saint. Countries also have patron saints. Who is the patron saint of the United States?

If you answered, "Mary, the mother of Jesus," you are correct. In 1846, the bishops of the United States asked Mary to watch over our country and its people in a special way. They also chose one particular title and feast of Mary—her Immaculate Conception.

The title of the Immaculate Conception recognizes Mary’s privilege of coming into the world free from sin. Through the power of Jesus’ Death and Resurrection, every human being can be freed from sin at Baptism. Through that same power, Mary was always free from sin, even from that very first moment of life.

On December 8, the Church celebrates this special privilege given to Mary. At the liturgy we thank God for all his blessings he has given to the people of our country. And we can thank Mary for watching over and protecting our people.

Casimir is patron saint of Poland and Lithuania.

Casimir grew up in a world where his life was not his own. As a prince of Poland, the second son of King Casimir IV and Elizabeth of Austria, his life was scheduled to cement his father's authority and increase Poland's power.

Casimir realized from an early age that his life belonged to someone else, but to a much higher King than his father. Despite pressure, humiliation, and rejection, he stood by that loyalty through his whole life.

Born the third of thirteen children in 1461, Casimir was committed to God from childhood. Some of that commitment was the result of a tutor, John Dlugosz, whose holiness encouraged Casimir on his own journey.

It may be hard for us to imagine royal luxury as a pressure. But for Casimir, the riches around him were temptations to forget his true loyalties. Rebelling against the rich, fashionable clothes he was expected to enjoy, he wore the plainest of clothes.

Rejecting even ordinary comforts, he slept little, spending his nights in prayer. And when he did sleep, he lay on the floor not on a royal bed. Even though he was a prince, many of those around him must have laughed and joked at his choices. Yet, in the face of any pressure, Casimir was always friendly and calm.

Though his father must have wondered about him, he must have seen and admired Casimir's strength. He showed that he misunderstood this strength when he sent Casimir as head of an army to take over the throne of Hungary at the request of some nobles there. Casimir felt the whole expedition was wrong but was convinced to go out of obedience to his father. He could not help but feel at every step that it was disobedient to his other Father. So when soldiers started deserting, he was only too glad to listen to the advice of his officers and turn back home. His feelings were confirmed when he discovered that Pope Sixtus IV had opposed the move.

His father, however, was furious at being deterred from his plans and banished Casimir to a castle in Dobzki, hoping that imprisonment would change Casimir's mind. Casimir's commitment to what he believed was right only grew stronger in his exile and he refused to cooperate with his father's plans any more despite the pressure to give in. He even rejected a marriage alliance his father tried to form. He participated in his true King's plans wholeheartedly by praying, studying, and helping the poor.

He died at the age of 23 in 1484 from lung disease. He was buried with his favorite song, a Latin hymn to Mary called "Omni die dic Mariae" which we know as "Daily, Daily Sing to Mary." Because of his love for the song, it is known as the Hymn of St. Casimir though he didn't write it.

You will be taken to our Mass page. 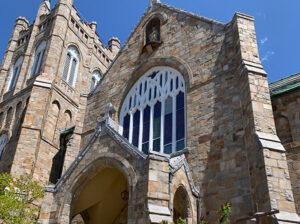